Read through the timeline to learn more about Renold's rich heritage over the last 140 years!

The Chain Making Company James Slater (later to become Hans Renold Co.) introduced the roller into chain. Prior to this time transmission chain consisted of only pins and plates.

At the age of 21 Hans Renold, son of a burgher family in Aarau, Switzerland, came to England and found work in Manchester with a firm of machinery exporters.

His independent and inventive spirit soon found expression in the purchase of a small textile-chain making business in Salford.

The Hans Renold Co. was established following the purchase of the James Slater business. This makes Renold the oldest established transmission chain company still in existence in the world. 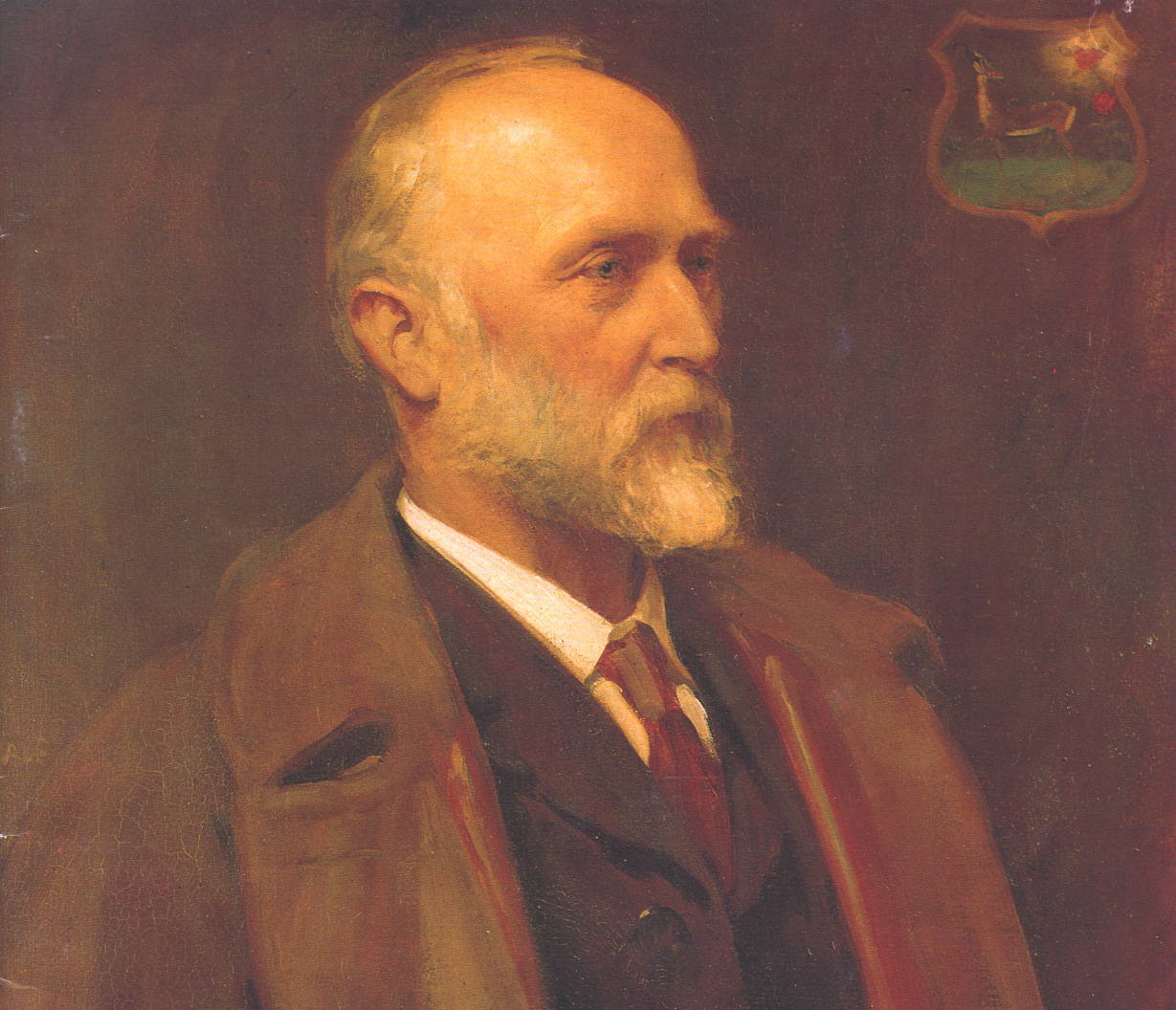 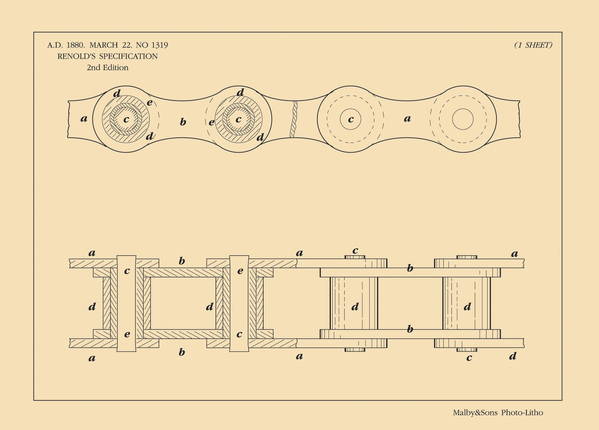 Hans Renold Co. introduced the patented feature of the solid bush. This was the origin of the bush roller chain, the design of which is still used today throughout the world.

Thus began the enterprise of which The Institution of Mechanical Engineers was to say in a memoir: "Few realise how extensive is the influence of Renold's inventiveness on both civil and industrial life throughout the world.

Hans Renold's vision was not restricted to the prospects in UK industry and over the following years he began the international expansion of his company.

A patent for the block chain was applied for by Hans Renold but he decided to openly give his idea to the cycle trade for all to freely manufacture. Undoubtedly he gained many friends by this charitable action.

Hans Renold Co. were riveting the bearing pins in the assembled chain.

Hans Renold Co. designed and manufactured a machine for the Dry Tumbling (Jingling) of chain components.

As early as 1893 Hans Renold Co. were using hardened components.

Hans Renold Co. designed and manufactured a machine for producing the Rotary Rivet on the ends of the chain bearing pins.

The need for an Inverted tooth (silent chain) was apparent to Hans Renold and this resulted in his patent of 1895. Although his design of chain was superseded in later years by the silent chain with rocker joints, he made an impact in the introduction of such a chain.

Hans Renold Co. designed and manufactured a machine for the Wet Tumbling (Jingling) of chain components. 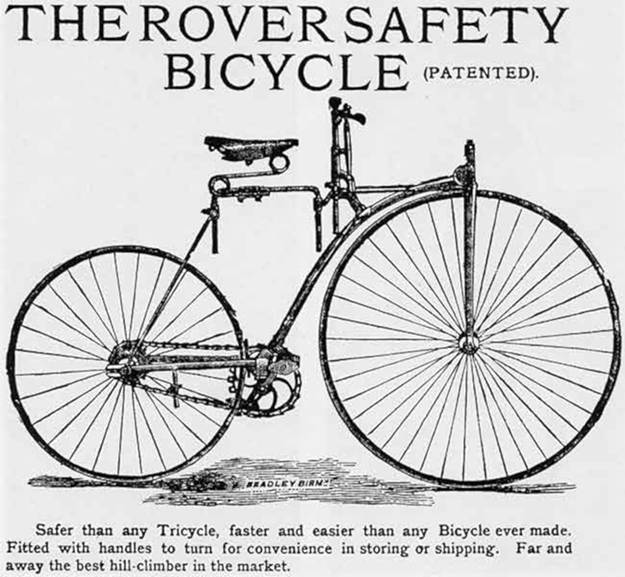 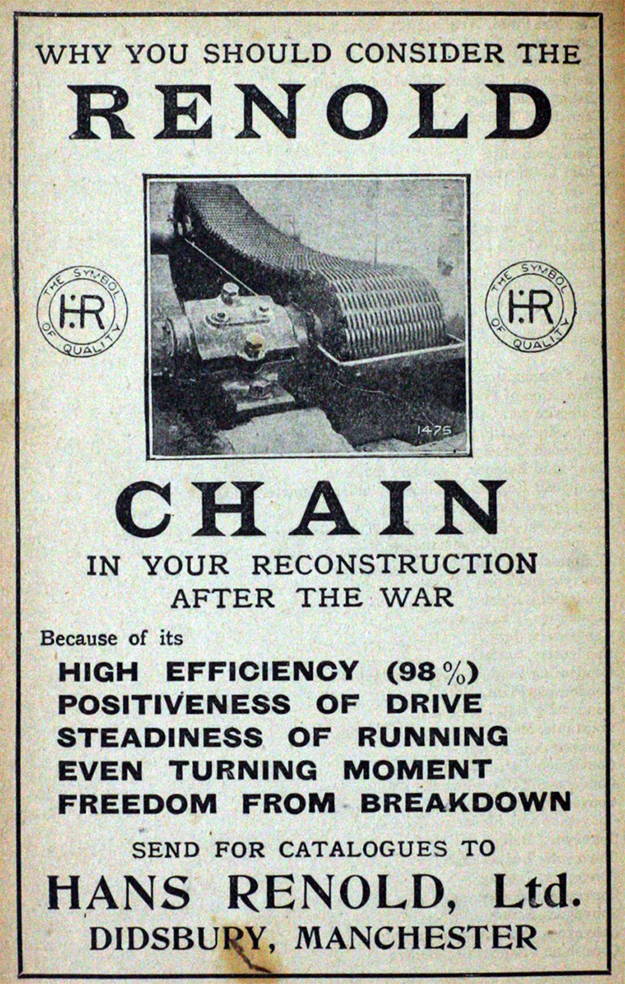 Hans Renold Co. designed and manufactured a machine for the proof loading of their chain.

Hans Renold Co. introduced the 48 hour week when the general practice in engineering was 52 or more.

Hans Renold Co. introduced their patented feature of the end recess in the bearing pin.

Brampton Brothers Ltd. patented the integral bush/inner plate chain upon which so many cycle chains have been based.

Hans Renold Ltd. began supplying mortise block chains (and associated equipment) which were a notable part of the business for about 60 years.

During the construction of a new factory, rather than use belt drives from overhead lineshafts Hans Renold Ltd. designed, and installed, overhead chain drives.

Hans Renold Ltd. developed a machine for centreless grinding of bearing pins. This was long before centreless grinders became the factor in machine shop practice that they are now. 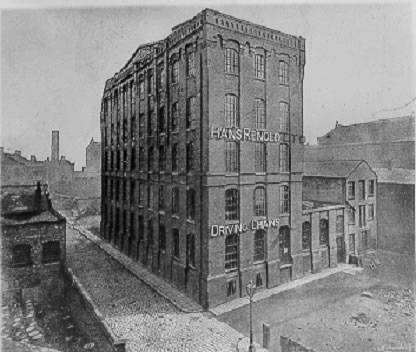 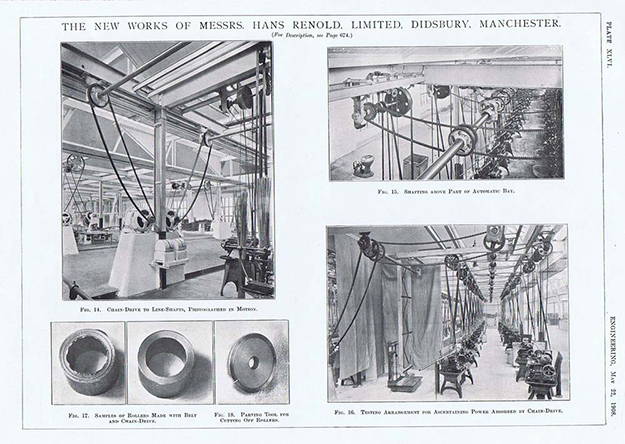 Hans Renold Ltd. designed and manufactured a Tumbler (Jingler) for the blueing of chain plates. The blue plates being a feature of the Hans Renold chain for many years.

Hans Renold Ltd. began the process of end softening of bearing pins and only now are many of Renold Competitors beginning to incorporate this feature.

Hans Renold Ltd. supplied the chain for The Great Clock at the Palace of Westminster known more affectionately as Big Ben (which was incidentally built in 1856).

Hans Renold gave the world his improved sprocket tooth profile which, with slight modification, was adopted by the United States as their Standard profile. 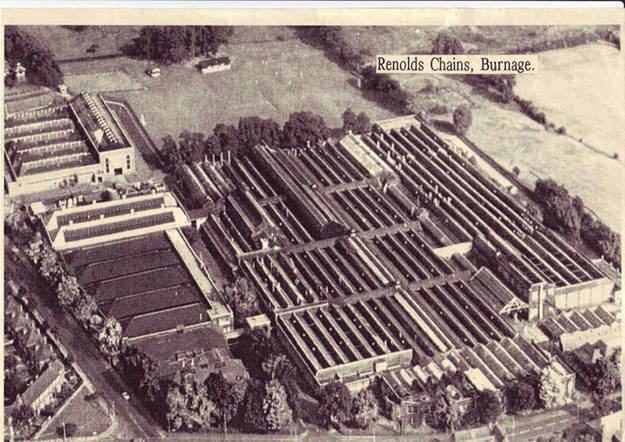 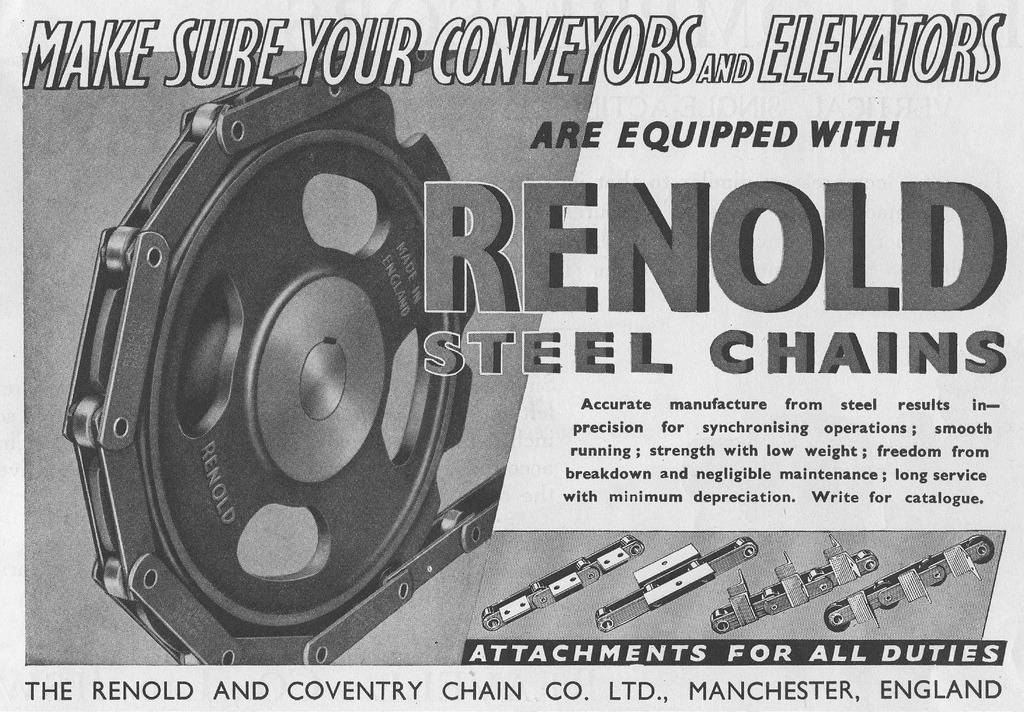 Hans Renold Ltd. introduced Stock Drives, something of which is taken for granted today.

Around 1916 The Coventry Chain Company Ltd. developed and manufactured track chains for use on tank vehicles.

Hans Renold Ltd. were still leading the world by having coned (i.e. tapered) bush bores in 1917. The first coning machine being designed and manufactured in May 1900 (see above).

The first acquisition of a major competitor came in 1925, when Brampton Brothers Limited, with its French manufacturing subsidiary at Calais, was purchased and the operation merged with the manufacturing facility previously established in Coventry.

Hans Renold Ltd. were approved under the A.I.D. regulations to issue Inspection Certificates and were likewise an approved A.R.B inspection authority.

Chain supplied by Renold and Coventry Chain Co. Ltd had chamfered plates some being doubled chamfered (i.e. both sides).

Renold and Coventry Chain Co. Ltd patented the early design of bi-planar chain, (The patent being applied for in 1928). 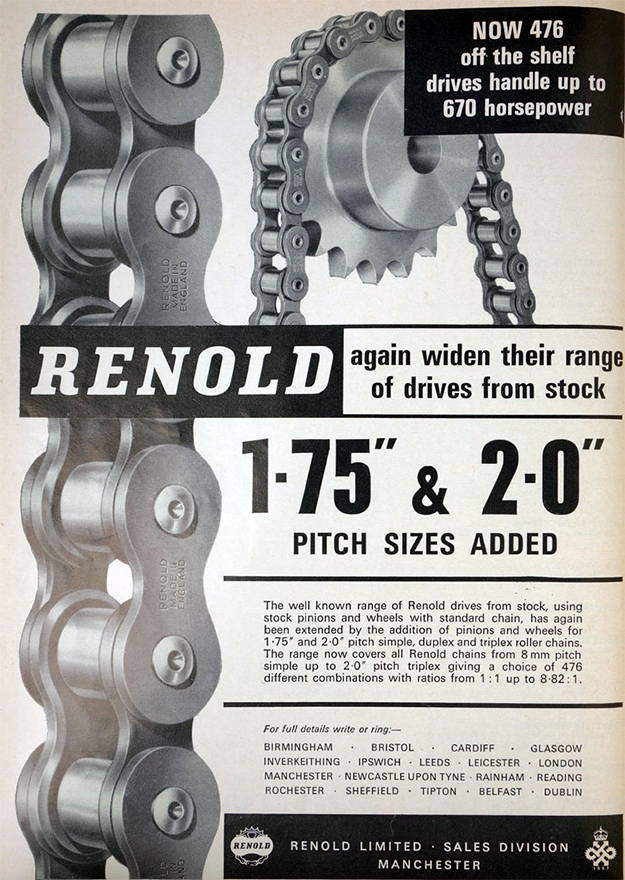 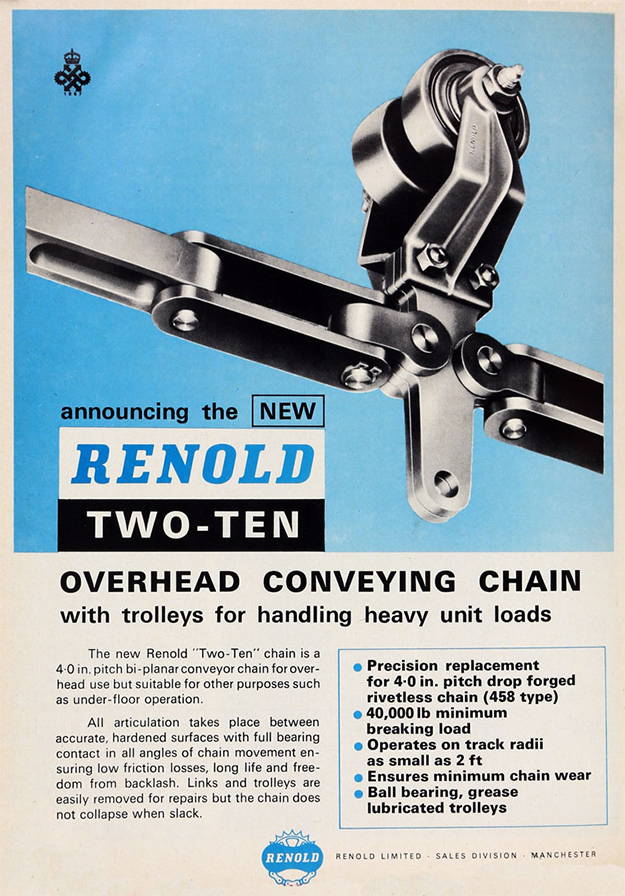 The Whitney Chain & Mfg. Co. (who later became part of the Renold group) obtained the patent for the tin-printer chain which is still used today throughout the world.

Renold Chains Ltd. introduced their improved design of bi-planar chain with their patent of 1954

In 1963 Renold acquired Arnold and Stolzenberg GmbH of Einbeck, one of the largest and oldest-established chain manufacturers in Germany.

A significant strategic development of the Renold Group was the acquisition of John Holroyd and Co Ltd in 1964, and this marked the start of the transition from purely chain manufacture to manufacture and supply of a complete range of power transmission products and precision machine tools. Further acquisitions brought more gearing, couplings, clutches, brakes, variable speed drives and various hydraulic products into the Group.

Renold designs and manufactures a machine for hard ball drifting of plates.

Renold supplies the chain for the famous Gastown Steam Clock in Vancouver, Canada.

Renold chain fitted to the Dartford Creek Barrier, a flood prevention application on the Thames.

In December 1998 Renold acquired Jones & Shipman plc in the UK and with it a range of precision production and tool room grinding machine tools, "superabrasive" machine tools from Edgetek in the USA and electronic control systems from Goodwin in the UK.

In March 2000 Renold acquired Jeffrey Chain Corp., a leading manufacturer of industrial chain in the USA. Jeffrey Chain has strong US brands and established relationships with major US distributors, of power transmission equipment, and original equipment manufacturers.

Smartlink fitted to the Dartford Creek Barrier, a flood prevention application on the Thames.

STEP 2020 strategic plan announced with ambitious growth plans over the next 5 years.

Today, Renold employs around 2,500 people in more than 23 countries around the world.